With the English Premier League season already finished finally, a list of players have been chosen to fill up the slots for the PFA Premier League Team Of The Season and without any surprise, it is dominated by Manchester City players. As many as six players from the Cityzens made it to the team after they conquered England by lifting the English Premier League title. City were the best team in the league and ended their remarkable campaign by being crowned league champions at the expense of the league’s other big teams. 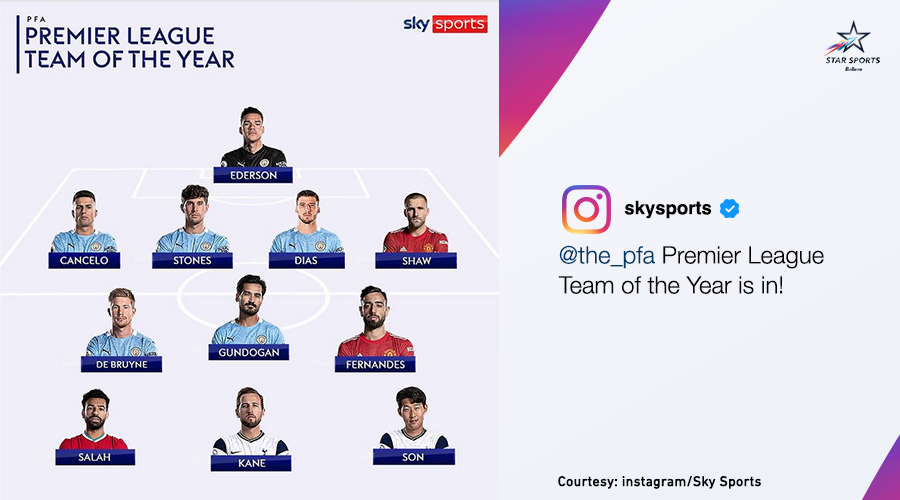 Aside from the six players from Manchester City, there were two stars from Manchester United, one from Liverpool, and two from Tottenham Hotspur. City goalkeeper Ederson is the man between the sticks in the team following a remarkable campaign that saw him keep the most clean sheets in the league. He is joined by teammates and defenders Cancelo, Dias, and Stones.

The other defender to make the list is Red Devils star Luke Shaw who enjoyed a brilliant campaign after taking the signing of Alex Telles from FC Porto personally. Bruno Fernandes is the second Manchester United star on the list and it comes as no surprise after the scintillating form he was in all season. Liverpool star Mohamed Salah was the only addition from the Anfield club and the two other stars are Harry Kane and Heung-Min Son, both from Tottenham.

All the included players enjoyed a great campaign and will be looking forward to having better impacts at their respective clubs ahead of the new season which is expected to be a tougher one than this one.

Full List Of PFA Premier League Team Of The Season